Oh the dread of car repairs with MCS!
Handy Hubby Hero to the rescue! 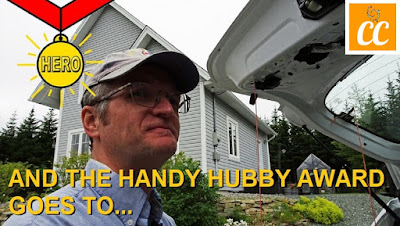 I had to get the hatch re-painted on my new Micra as the lip edge was peeling - Now, with MCS/EI you know something like this is a HUGE ordeal. I asked Nissan if they could remove the hatch and bring it in for painting as I was terrified that the paint would get into the air vents and contaminate the car.

The Manager at O'Neil Nissan was extremely accommodating and he and his service manager decided to send a mechanic out to my home to remove the hatch - take it for painting - then come back and re-install (Pretty amazing!).

All went well with the removal and painting but the reinstall had some hiccups :/
Firstly the nice mechanic guy was drenched in some sort of strong fragrance that even being outside near him was bothersome, I figured at first I could handle it...But I couldn't and had to go inside.

They got the hatch re-attached to my car but after several hours could not get the wiring harness for the lights and locks back in place (really poor design actually). He then tells me that the car not only has to go the shop, but also has to have the window removed by a glass company and then re-installed by that company.

Again, they were accommodating saying it could be done outside, but at this point I was already getting sick and worried about what else could happen. Unless you have the condition it's so easy to overlook things like just getting inside the car for a minute with fragrance on or even tossing a rag inside on the carpet, or just using a bit of grease...Not to mention perhaps needing a new window seal and they could decide to clean the glass...Way too much to deal with.

It's day 2 with a migraine, wheezing, coughing painful sinuses and nausea, just from an outdoor encounter with the mechanics fragrance.

WHAT WAS I GOING TO DO? HUBBY TO THE RESCUE!
(Insert hubby in superman costume) :D

With no special tools (Just a different color string than the mechanic - because orange string works much better than white teehee) hubby had the re-wiring done for me in 30 minutes! No need to risk taking the car to the garage, no window removal, just some clever thinking, electrical tape and a string. It took another half hour or so to hook everything back up and put the panels back on and have everything looking new again - WHEW! Great to have a handy hubby! Lifesaving actually.

Oh and here's some special orange string
just in case you try this yourself (Teehee):