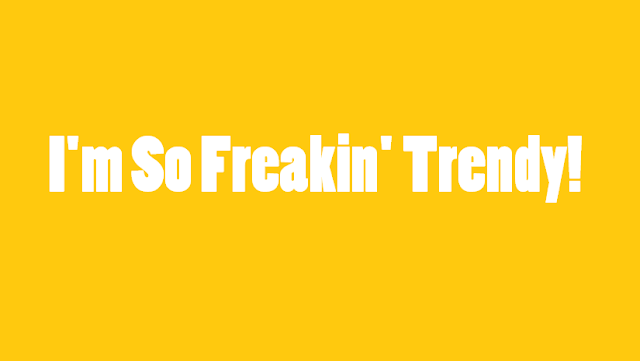 Funny how the last 15 years has changed other peoples perspective on how I choose to live my life.

I went from "weirdo" to "trendy" in a decade and a half.

Other people: What's wrong with you? That home you designed and built is way too small it'll take down the value of the community.

~15 years later ~
Oh I see you're on board with the tiny home trend, that's so neat!
Me: Umm, I built the first one in our province in the face of all the naysayers

Other People: A chemical-free house? What do you mean VOC-free? You have some weird allergies lady, it's probably all in your head.
~15 years later ~
Oh, your house is LEED certified is it? That's wonderful!
Me: Nope no such thing as leed certification when I built my healthy home

Other People: You eat "organTic" food? What's organTic? (Organic)
~15 years later~
Ah yea, eating organic is all the trend now isn't it?
Me: I've been eating organic for 22 years for my health, thank you

Other People: Those people are growing vegetables and wildflowers on their front lawn - That's not acceptable!
~15 years later~
Oh it's so cool you have an urban food and pollinator garden.
Me: Thank you, it only ever made sense to me

Other People: There's that crazy chicken lady again, you can't have chickens in a subdivision - Lets take them to court!
~15 years later~
Everyone wants a few chickens in their yard, you had chickens? OMG That's so cool!
Me: Yes, had pet chickens and fought to keep them

Other People: There's that weird kill joy person who hates the pretty fireworks!
~15 years later~
OMG the fireworks scare pets and wildlife, cause asthma and pollute the air and soil with heavy metals!
Me: Glad you figured this one out!

Other People: Those are the weirdos who don't want to use pesticides, they just want everything covered in weeds or something. The government lets us use it so it must be safe.
~15 years later~
Save the bees, pesticides cause cancer, stop using poisons.
Me: Really glad you finally figured this one out too!

Other People: You create your own cleaners and cosmetics? Out of what? That's so weird.
~15 years later~
Oh did you get those DIY products on Pinterest or from so&so's blog?
Me: I didn't even have internet access when I started formulating all of my own products.

It's actually interesting and I find it somewhat amusing, even a tad insulting perhaps, that people now think I'm "trendy". I've never in my life cared about following a trend, but yet everything I do seems to become trendy many years after I've already done it and moved on.
Then I'm accused of following the trends. :D

I've been creating and sharing my unique recipes for food and cosmetics online since 2006. But what I see happening is that many people rather than being creative themselves, simply follow a trend, copy other people's content, and do a better job of marketing themselves. I then get people telling me that I'm copying someone else or following a trend, if you check the publishing date, you'll find the exact opposite. Most of my creations were posted many years before anyone else.  Just because someone has made a popular video claiming they are creating stuff, does not mean they actually did.

As a member of several blogging and youtube groups, I'm always saddened to see that people are actually told to create content based on the trends, they are told to copy other people and present it better. Nobody ever gives credit to each other anymore either. It's a copycat eat copycat world today.

Just remember, not everyone is following a trend, some people have already paved the way.