Twigs for Teeth | Brushing With Miswak

On my never ending quest for natural dental health
I discovered something that seems amazing. 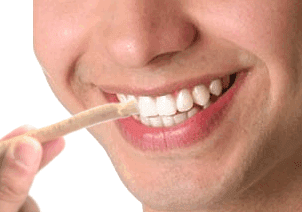 The twig is cut from the Salvadora persica tree roots also known as the arak tree or the peelu tree which grows in zone 10 areas. And I found a source for seeds if you are so inclined to attempt to grow it.

Toothbrushes made from roots and small branches and have been used for over 1000 years in India, Arabia and Africa. Its fibrous branches have been promoted by the World Health Organization for oral hygiene use. Research suggests that it contains a number of medically beneficial properties including abrasives, antiseptics, astringent, detergents, enzyme inhibitors, salts, silica, sulphur, vitamin C and flavonoids and naturally occurring sodium fluoride and chlorine.

Several other agents occurring in the bark aids in prevention of dental caries, such as antimicrobial agents that suppress bacterial growth and the formation of plaque. The tooth twig is also said to relieve toothache and gum disease. Twigs also are used for cleaning teeth and for relieving toothaches. Decoctions of leaves are used as a mouthwash, and masticated leaves for tooth and gum problems.

The naturally occurring cleaning agents kill microbes and germs, it whitens teeth and it has a scent that gives your breath a naturally fresh smell...It is said to smell and taste like anise.

Studies have also shown that peelu has anti microbial activity against Streptococcus bacteria. This bacteria is what causes dental caries.

The Effect of Salvadora Persica Extract (Miswak) and Chlorahexidine Gluconate on Human Dentin: A SEM Study

A good blog posting on peelu

There are many products on the market containing peelu powder but you still have to deal with synthetic ingredients and a synthetic brush so I would like to try the real thing. If it brushes, cleans, kills bacteria and freshens breath all on its own then who needs to tamper with that?

To use peelu you simply chew and peel one end of the twig until the end frays out into bristles which you brush your teeth and gums with then and rinse the brush as you normally would with your regular toothbrush. The twig can last a long while because you can cut the used end off after a week or two and restart the procedure until the twig has been used up.